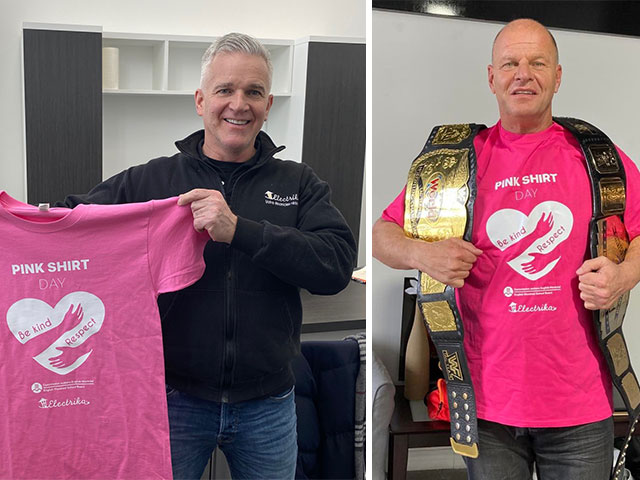 Bullying is a problem in schools, workplaces, homes, and online. Over the month of February, and throughout the year, Pink Shirt Day aims to raise awareness of these issues, as well as raise funds to support programs that foster children’s healthy self-esteem.  In 2007 in Nova Scotia, Grade 12 students David Shepherd, Travis Price and a few friends saw that a Grade 9 student was being bullied for wearing a pink shirt on the first day of school. They knew they had to do something to show that this kind of behaviour was not OK and they decided to go out and buy a bunch of pink shirts and hand them out to other students to wear. By the end of that week, most of the students in the school were wearing pink shirts to show support for the Grade 9 student who was bullied.

The English Montreal School Board is proud to announce that Electrika, one of the only companies to exclusively offer residential electrician services in Montreal and Laval, will be the official sponsor for the Pink Shirt Day campaign.  Owner John McElligott, who started the company in 2004, notes that on t-shirts he recently had printed for staff the word “Respect” appears on the shoulder. “Clients who do not treat our employees with respect are engaging in a form of bullying,” he said.

Rougeau comes from Quebec's most prominent wrestling family. In the late 1980s, he starred in the World Wrestling Federation — today's WWE — in a tag team along with his brother Raymond. After Raymond retired in 1990, he continued to wrestle for another decade before retiring, taking on several other personas, including The Mountie. During his career, Rougeau says he encountered bullying at the hands of a couple of his WWF contemporaries — another well-known tag team called the British Bulldogs. In recent years he also started speaking in schools, talking to kids, and performing skits about how to deal with bullies. “I'm teaching them how to react to it, how to solve it,” he said.

The livestream can be viewed at https://www.youtube.com/watch?v=XEQR5LoPBoo.